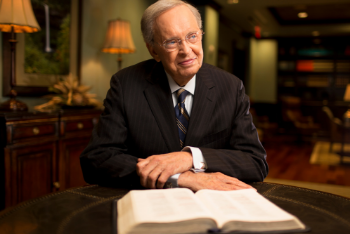 In Touch with Dr. Charles Stanley

Dr. Charles F. Stanley is the senior pastor of First Baptist Church Atlanta and founder of In Touch Ministries, both located in Atlanta, Georgia. Dr. Stanley’s heart’s desire is to get the gospel to “as many people as possible, as quickly as possible, as clearly as possible, as irresistibly as possible, through the power of the Holy Spirit to the glory of God.”

Because of this goal, Dr. Stanley’s teachings are transmitted as widely and effectively as possible. He can be heard weekly at First Baptist Church Atlanta, daily on “In Touch with Dr. Charles Stanley” radio and television broadcasts on more than 2,800 stations around the world, on the Internet at intouch.org, and through the In Touch Messenger Lab. Dr. Stanley’s inspiring messages are also published in two award-winning publications—In Touch devotional and In Touch Magazine—and in the more than sixty books he’s authored.